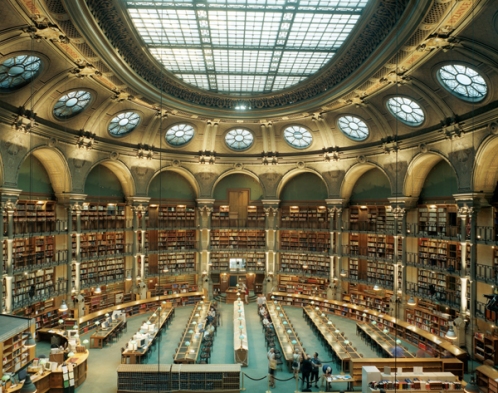 The Royal Library of Alexandria, or Ancient Library of Alexandria, in Alexandria, Egypt was one of the largest and most significant libraries of the ancient world It was dedicated to the Muses, the nine goddesses of the arts. It flourished under the patronage of the Ptolemaic dynasty and functioned as a major center of scholarship from its construction in the 3rd century BC until the Roman conquest of Egypt in 30 BC. With collections of works, lecture halls, meeting rooms, and gardens, the library was part of a larger research institution called the Musaeum of Alexandria, where many of the most famous thinkers of the ancient world studied.

The library was conceived and opened either during the reign of Ptolemy I Soter (323–283 BC) or during the reign of his son Ptolemy II (283–246 BC). As a symbol of the wealth and power of Egypt, it employed many scribes to borrow books from around the known world, copy them, and return them. Most of the books were kept as papyrus scrolls, and though it is unknown how many such scrolls were housed at any given time, their combined value was incalculable.
The library is famous for having been burned resulting in the loss of many scrolls and books, and has become a symbol of the destruction of cultural knowledge. A few sources differ on who is responsible for the destruction and when it occurred. Although there is a mythology of the burning of the Library at Alexandria, the library may have suffered several fires or acts of destruction over many years. Possible occasions for the partial or complete destruction of the Library of Alexandria include a fire set by Julius Caesar in 48 BC, an attack by Aurelian in the 270s AD, and the decree of Coptic Pope Theophilus in 391 AD.

After the library was demolished much of the information was lost and the world today could have been much more advanced than it is now. For example, there were documents proving the earth was round but people had to relearn it over 10 centuries later